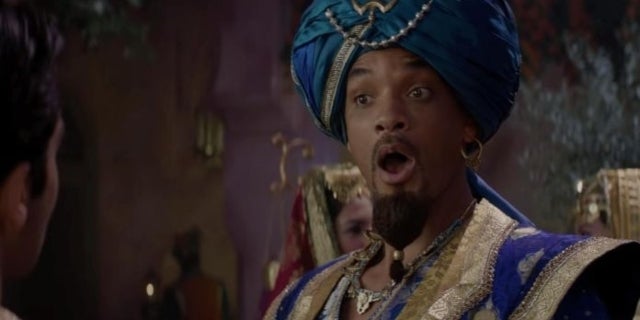 One of the most important pillars of the 2019 live-action Aladdin wasn’t the classic songs but Will Smith‘s iconic new take on the genie from the animated film. Though it featured a pretty big change to the character from the Robin Williams counterpart, fans around the world loved Smith’s version (enough to propel the film to over $1 billion at the global box office and a sequel officially in the works). Smith has taken to instagram to pay tribute to his character, showing off a video from Dancakes and featuring a piece of pancake art that is designed to look exactly like his character and the resemblance is uncanny. Check it out below!

Smith will seemingly reprise his role for a sequel along with stars Mena Massoud and Naomi Scott. The script for the sequel is being written and official offers for these three won’t go out until it’s completed. It’s unclear when we can expect the sequel to arrive in theaters, but it likely won’t be until 2022 at the very earliest.

Variety previously reported the news that the original sequels to the animated Aladdin will not be the basis for the live-action follow-up. For a little bit more context on the sequel, THR reported that Disney assembled a writers room over the summer to brainstorm story ideas for an Aladdin sequel. The trade goes on to note that at one point the studio was “looking at other tales from One Thousand and One Nights” to use as the basis for the movie. Other stories included in the fables include the Seven Voyages of Sinbad and Ali Baba and the Forty Thieves (which partially inspired the second animated sequel).

At this stage in the development of the Aladdin sequel it is unclear if director Guy Richie will return to helm the sequel. Producer Dan Lin will return behind-the-scenes for the follow-up, having previously disclosed to ComicBook.com that the idea of a sequel had been explored by the studio.

“When we first made the movie wanted to just make the best movie we could and let audiences tell us if they wanted to see more,” Lin said. “And I would say resoundingly audiences want to see more. They’ve watched this movie multiple times. We have lots of fan letters about people who really go back and they bring their friends and bring their family. And so we feel like there’s more story to tell. We are going to treat it the same way we treat the original Aladdin movie and not going to do a shot by shot remake of anything that’s been done before. We’re really looking at what’s been done before in the past and the home video, and there’s just more story to tell with the underlying materials. So without giving away too much, we are certainly exploring where we can go with this franchise.”

Aladdin is now available to stream on Disney+ with a spin-off film in the works for the streaming service focusing on Billy Magnussen’s Prince Anders. If you haven’t signed up for Disney+ yet, you can try it out here.

Note: This is not a sponsored post, but if you purchase one of the awesome products featured above, we may earn a small commission from the retailer. Thank you for your support.