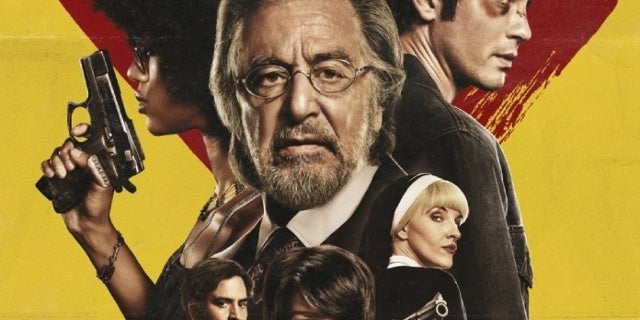 Of all of the new TV shows that are set to debut this year, fans are especially excited to see how Hunters comes together. The Amazon Prime series, which is executive produced by Jordan Peele, is supposed to bring a whole new kind of vigilante story into the TV world, and now we have a look at exactly what that will entail. On Thursday, Amazon released a brand new “red band” trailer for Hunters, which showcases the violent, bizarre, and high energy mindset that the series has in store. As Amazon’s own description for the trailer proclaims, “this red band trailer contains graphic violence and cursing from a rag-tag team of Nazi hunters exacting their bloody righteous revenge. Sooo definitely don’t watch this at your work desk.”

Inspired by true events, Hunters will follow an eclectic and diverse group of mercenaries in 1977 New York City, who discover that hundreds of escaped Nazis are living in America. The group is led on a bloody quest for revenge and justice, which leads them to stumble into a far-reaching conspiracy that could forever shape the world.

“There’s an originality in this show. It’s somewhat eccentric,” Pacino said during an appearance at the Television Critics Association press tour. “You’ll see it from certain angles where it’s not a dry thing. They’ll catch you off guard, and you really can’t believe it. […] You never know when a joke is going to come. That’s really what appealed to me when I read it: that things are not what they seem.”

What do you think of the red band trailer for Hunters? Share your thoughts with us in the comments below!

Hunters will be released on Amazon Prime Video on February 21st.