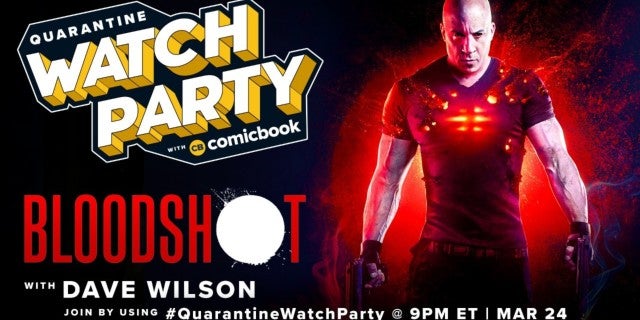 On Tuesday night, ComicBook.com will play host to a very special Quarantine Watch Party event. To celebrate the home release of Bloodshot, ComicBook.com’s official Twitter account will be taken over by Bloodshot director Dave Wilson, beginning at 9pm ET. Bloodshot hit theaters earlier in March but due to theatrical shutdowns in relation to concerns of the spreading of the COVID-19 virus, it is coming home for watching in the safety of living rooms. As a means to encourage fans to stay home, ComicBook.com has played host to Quarantine Watch Party events, each of which have spawned thousands of viewers and tweets, prompting Twitter to recognize the conversation as trends.

How does it work? Simple. At 9pm ET on Tuesday night, everybody who wishes to attend the Quarantine Watch Party presses play on their downloaded edition of Bloodshot. Bloodshot is officially available for digital downloads on Tuesday, March 24, with more information on how to download through apps such as Vudu, Prime Video, FandangoNOW, Microsoft Store, Playstation Store, and more. For more information on how to purchase Bloodshot ahead of the Quarantine Watch Party, check out Sony’s official site.

This means Tuesday, March 24, is the at home premiere of the film and the perfect way to celebrate is by participating in the Quarantine Watch Party live on social media with the film’s director! There will be exclusive new intel and exciting facts throughout the party!

Wilson made his directorial debut with Bloodshot, the first movie to feature characters from the Valiant Comics universe. With Vin Diesel in the titular role, Bloodshot is supported by Eiza Gonzalez, Sam Heughan, Lamorne Morris, and Guy Pearce. “I’m a big fan of the comic,” Wilson told ComicBook.com, quickly adding, “I’m a huge fan of science fiction.” Since he was a kid, Wilson spent “countless hours” reading science fiction novels. His Bloodshot movie becomes a crossroads for the Valiant Comics stories and his passion for such a genre, resulting in his opportunity to provide notes on the script and bring his version of the movie to life. “That’s what I love about it, and sort of the ’80s and ’90s action movies I grew up loving.”

Wilson will have plenty more to say from the official ComicBook.com Twitter account during the Quarantine Watch Party. When 9pm ET rolls around, everybody presses play simultaneously and joins the conversation using #QuarantineWatchParty on Instagram and Twitter.

Plenty of reason to stay home, be safe, and have fun together! The Quarantine Watch Party will be hosted by Comicbook.com’s Brandon Davis, as well as other staff members including Adam Barnhardt, Evan Valentine, Megan Peters, Joseph Schmidt, and ComicBook Nation co-host Janell Wheeler.