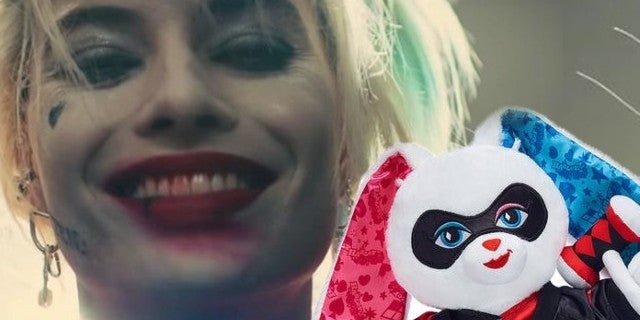 Birds of Prey is in theaters now and people are packing the house to see Harley Quinn’s latest film. Build-A-Bear just put out a new bunny-themed around the villain, and it is safe to say that this stuffed animal is basically terrifying. So, the outfit is modeled after her classic comic look, but then things get a little bit weird. The eyes are supposed to resemble her mask, but it feels like they’re staring into your soul. Each ear is color-coded red and blue, just like Margot Robbie’s hair in the movie. The paws get the same treatment as the ears. Everything about this is pretty strange, but if you would like to purchase this bunny, you can go get it from BuildABear.com.

Speaking of scary things, there was one stunt that the crew filmed for Birds of Prey that was a little bit more hairy than the others. Producers Bryan Unkeless and Sue Kroll talked to Comicbook.com about that moment. “She’s so brave. She’s do anything. Anything for a movie…” Kroll began. “And she’s not, I don’t think she is scared. I was more scared for her.” In this instance it was a shot where she was being pulled by a car on roller skates. One wrong move and things could have gotten really bad.

Robbie discussed the film’s stunts in previous interviews as well. “There are so many. Recently… I can’t talk about them, since the movie isn’t out yet. There’s a lot of really cool stunts in the Birds of Prey movie. Quite a few of them, I couldn’t do, because they were just too risky. But no, I’m constantly amazed by stunt performers. One of my brothers is actually a stuntman, so I have a deep appreciation for it.”

If you’re ready for a wild ride, Birds of Prey will have you covered. Check out the film’s official synopsis:

Birds of Prey (And the Fantabulous Emancipation of One Harley Quinn) is a twisted tale told by Harley herself, as only Harley can tell it. When Gotham’s most nefariously narcissistic villain, Roman Sionis, and his zealous right-hand, Zsasz, put a target on a young girl named Cass, the city is turned upside down looking for her. Harley, Huntress, Black Canary and Renee Montoya’s paths collide, and the unlikely foursome have no choice but to team up to take Roman down.

Birds of Prey is in theaters now.

HARLEY QUINN AND THE BIRDS OF PREY #2 Pushed Back Four Weeks
How to Stream Movies Online for Free With No Subcription
BAD MACHINERY’s LOTTIE Takes the Spotlight in WICKED THINGS with ALLISON, SARIN, COGAR
Is the Order a Rabbit? Releases Season 3 Visual Drawn by Koi!
WONDER WOMAN 1984 Postponed 2 Months Due to Coronavirus