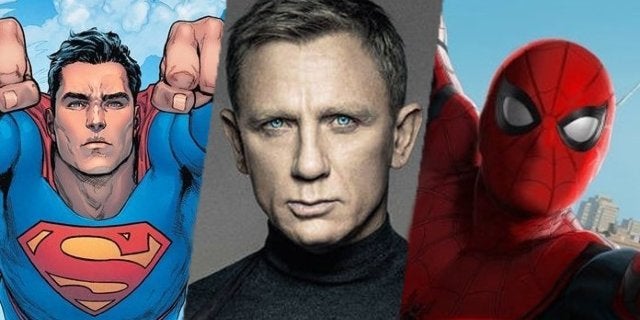 Daniel Craig admitted that he wanted to play Superman or Spider-Man growing up, not James Bond. The actor told Saga magazine about that during a recent interview. As many Bond fans are aware, Craig is billing this performance in No Time to Die as his Bond sendoff. But, in the lead-up to the film, the star has revealed some of the parts about this role that he’s enjoyed the most. It feels really relatable that someone who plays a cinematic hero dreamed of playing a literal superhero at one point.

“People are always saying to me, ‘You must have dreamed of playing James Bond when you were a kid.’ The answer is no,” he told the publication as reported by Metro. “I never did. I dreamed of being all sorts of other things – Superman, Spider-Man, the Invisible Man, even a good old-fashioned cowboy. But Bond so much, which seems ironic now… I’ve been lucky enough to land one of the best roles in movies. There’s no downside to playing Bond.”

MGM decided to push the latest James Bond release to November because of coronavirus concerns last week. “MGM, Universal and Bond producers, Michael G. Wilson and Barbara Broccoli, announced today that after careful consideration and thorough evaluation of the global theatrical marketplace, the release of NO TIME TO DIE will be postponed until November 2020,” the official James Bond Twitter account said. “The film will be released in the U.K. on November 12, 2020, with worldwide release dates to follow, including the US launch on November 25, 2020.”

As for Craig, if there was any doubt that this was the last go-around, there shouldn’t be after these words below. He told Entertainment Weekly that it had been a fun ride, but he knew when his time was up. The star is really proud of the picture and all the work they’ve done over this run:

“This is it. That’s it, it’s over,” Craig told EW. “But I, for one, am incredibly happy I got the chance to come back and do another one, because… this movie, whatever people think of it — who knows what people are going to think of it — everybody, including these people here, just put everything into it. And we did our best. And it feels like that. I know it sounds simplistic, but we did.”

Are you pumped for No Time to Die in the fall? Let us know in the comments!