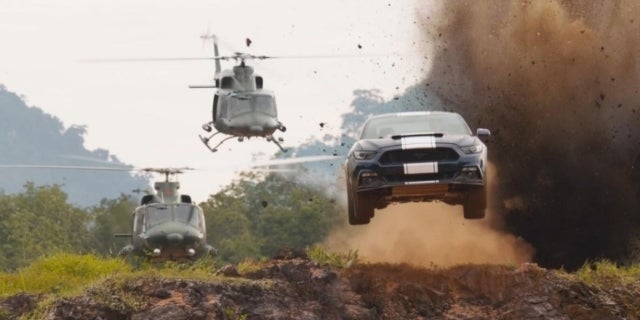 The stars of Fast & Furious 9 admit audiences are going to “question a lot” when it comes to pushing physics in the latest high-speed entry in the blockbuster Fast Saga. The film’s first action-packed trailer shows Letty (Michelle Rodriguez) flying through the air before landing on the hood of a vehicle steered by Dominic Toretto (Vin Diesel), who later rides an overturned car like a surfboard before catching another car flung in his direction. Beyond witnessing a rocket-powered Pontiac Fiero, audiences will also see a jeep carrying Tej (Chris ‘Ludacris’ Bridges), Ramsey (Nathalie Emmanuel) and Roman (Tyrese Gibson) race across a collapsing bridge before Jakob Toretto (John Cena) launches his spruced up car off a cliff, where it’s caught mid-air by a magnet plane piloted by Cipher (Charlize Theron).

“Let’s just say you’re gonna question a lot in this movie when it comes to physics,” Rodriguez told MTV International. “You’re just going to be like, [miming ‘wait, what?’] Let’s just say there’s a lot of that in this one [laughs].”

“For some stunts, they basically put a car at the end of an apparatus and spin you around and make you throw up,” Diesel explained. “It’s one of the tools needed to do some of the crazier stunts.” Added Rodriguez, “The tumbler. Most of it is special effects these days, and stunt doubles because of insurance, but the fighting sequences are always my favorite.”

Letty and Dom’s sister, Mia (Jordana Brewster), will team up for a brawl against armed assailants, a sequence that ends in the trailer with Letty catapulting herself knee-first into a thug — sending them out the window and towards the street below.

“What I love about the scene we have is it was all practical stuff,” Brewster said, adding director Justin Lin “very specifically wanted to make it not very special effects-heavy, so it was really fun and really rough-and-tumble and down-and-dirty. I love it.”

Emmanuel said playing a member of Toretto’s crew is “quite physical, depending on what the stunt is.”

“I sort of describe it like a ride. It’s a giant robot, basically, that’s been programmed to do certain movements and go up and down. And depending on how aggressive the stunt is, you can get thrown around quite a bit, so we have a really amazing supportive stunt team who make sure that our necks are warm, our bodies are warm, if you’re feeling any pain, you’ve got padding and things like that,” she said. “So it can be quite physically demanding, and especially if you’re climbing out of cars and jumping onto them, that gets quite intense.”

According to five-time Fast & Furious director Lin, “It takes about eight months to go from idea to production, so it takes a lot of time.”

“I feel lucky, we have the best people in the world,” Lin added. “Any idea that comes into my head, I share with them in a room and I see this kind of blank stare which I know is a good sign, because that means we’re gonna go figure out how to do it.”

For franchise newcomer Cena — who denies he’s playing the film’s villain despite the trailer showing Dom assembling his crew to take on his forsaken younger brother, described as a master thief, assassin and high-performance driver — says the larger-than-life action and stunts are “genuinely something that puts the Fast franchise above everything else. They find a way to make the impossible possible, and they do it every single movie, and they raise the bar every single movie.”

Fast & Furious 9 races into theaters May 22.