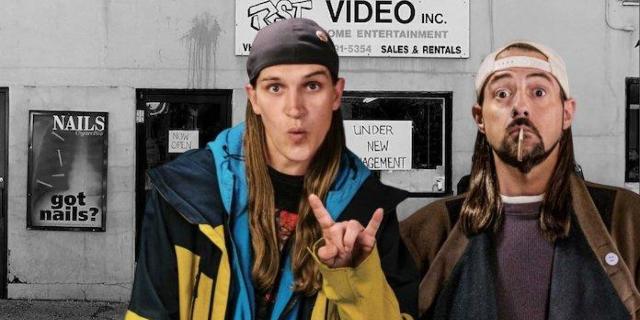 Kevin Smith and Jason Mewes are still in the midst of the Reboot Roadshow, which is taking them across the country to screen Jay & Silent Bob Reboot. The movie has been fairly well-received, earning a 69% critics score on Rotten Tomatoes, which is pretty good for a stoner comedy that had a limited release. When it comes to the audience score, Smith’s new movie is flying high with a whopping 94%. Overall, the movie has been playing to sold-out crowds on the tour, and Smith has been open about the money its been making along the way. Recently, Smith shared a positive review of the film, and someone took to the comments to say, “It was f***ing awful, beast of a self-indulgent flop. A F***ING EMBARRASSMENT OF A FILM. To think you wrote the classic Chasing Amy AND Clerks. Then became self-obsessed and scared of failure so started making trash.” Here’s what Smith had to say in response:

“You neglected to point out that #JayAndSilentBobReboot was shot completely in focus. And look at all this flopping. So much flopping…,” Smith wrote with photos of sold out crowds.

You can check out the interaction below:

You neglected to point out that #JayAndSilentBobReboot was shot completely in focus. And look at all this flopping. So much flopping… https://t.co/pHcgiflVc4 pic.twitter.com/9Euk9NmYk1

Many people came to Smith’s defense in the comments:

“Keep up the great work @ThatKevinSmith, and thank you for all the amazing entertainment you have provided to so many, even learned a thing or three along the way,” @Amdukias wrote.

“I don’t understand any of the hate. We loved here in my household. My friends that have seen it, all really enjoyed it/loved it as well,” @HangingWithTheD added.

“Yo for all the negativity, I’ve been watching your movies since I was a little-ish kid and the Reboot was like meeting up with old veteran friends,” @TheActualArcher replied.

The shared review was written by Keith Coogan, who called it “the crowd-pleasing, heartfelt encore of Kevin Smith‘s career.” You can read the full article here.