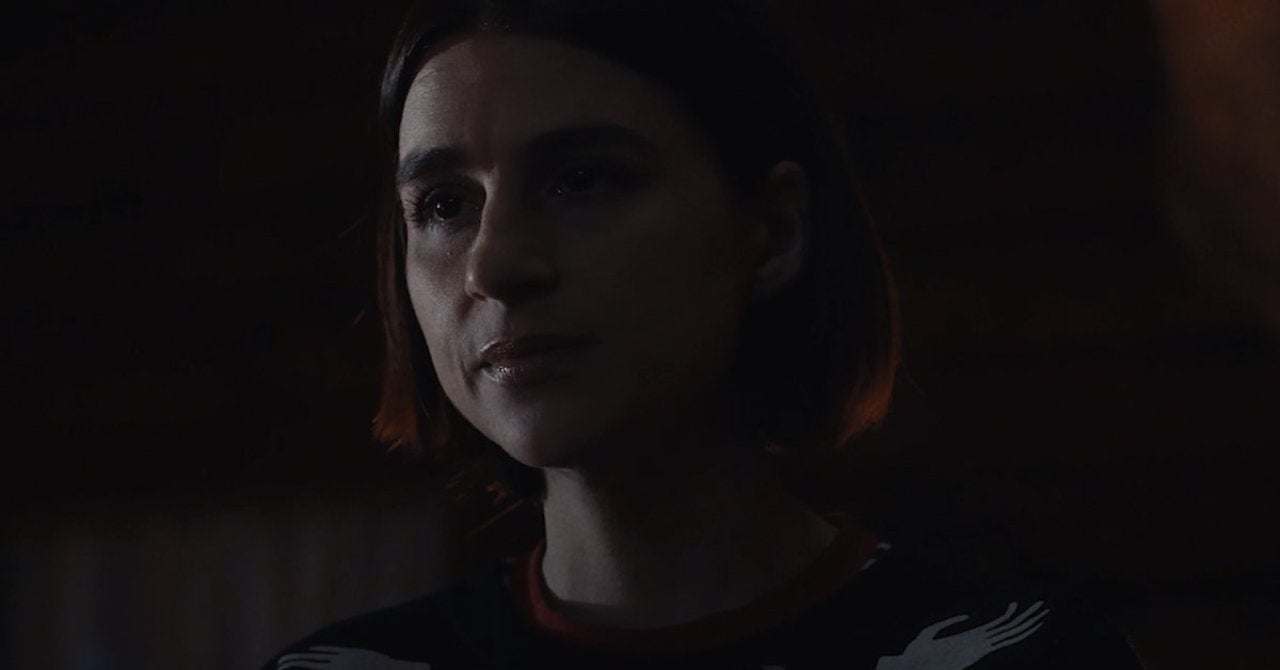 Scary stories have been told for generations, some of which offer eerie interpretations of actual events as others are meant to serve as ways to impart moral lessons on a listener, hopefully preventing them from suffering the same fate as a figure in a fable. Many of us have grown accustomed to witnessing terrifying tales unfold in movies and TV shows, but in writer/director Josh Ruben‘s film Scare Me, he instead relies primarily on the concept of storytelling to not only unsettle the on-screen characters, but also the audience. You can check out a creepy new clip from Scare Me above and see the film on Shudder on October 1st.

Fred (Josh Ruben, CollegeHumor), a frustrated copywriter, checks into a winter cabin to start his first novel. While jogging in the nearby woods, he meets Fanny (Aya Cash, You’re The Worst, The Boys), a successful and smug young horror author who fuels his insecurities. During a power outage, Fanny challenges Fred to tell a scary story. As a storm sets in, they pass the time spinning spooky tales fueled by the tensions between them, and Fred is forced to confront his ultimate fear: Fanny is the better storyteller. The stakes are raised when they’re visited by a horror fan (Chris Redd, Saturday Night Live) who delivers levity (and a pizza) to the proceedings.

Writer-director Josh Ruben’s debut feature is a metafictional horror-comedy about the pleasures and perils of storytelling and the genre’s power to exorcise social demons. Scare Me is a clever and chilling hybrid of humor and horror that subverts the cabin-in-the-woods trope. Propelled by Cash and Ruben’s comedic chemistry, Scare Me ventures into darker territory, drawing dread and pathos from the gender hostilities driving Fanny and Fred’s game of ghost stories.

Given the isolated nature of the film, it only has four members of the cast, with Ruben recently detailing the reaction Cash had to discovering just what was being asked of her for the role.

“As far as the casting process goes, it was serendipitous because Aya Cash is the wife of an old friend of mine I knew through voiceovers and she was a local to where we shot so I was able to go right to Aya and say, ‘You know, if you’d like to be home for a stretch of time, would you be interested in also doing this tiny movie?’ coming off of doing You’re the Worst, do some ‘acting’ challenges,” Ruben shared with ComicBook.com. “To which she was kind of like, ‘You know, when I imagined acting challenges, I thought you meant like a period piece, but you had me bark like a dog and do physical comedy, and a Cryptkeeper impression.'”

Scare Me streams exclusively on Shudder on October 1st.

Are you looking forward to the new film? Let us know in the comments below or contact Patrick Cavanaugh directly on Twitter to talk all things Star Wars and horror!

Star Wars: The Mandalorian Gets Cowboy Bebop Style Anime Opening
Hetalia World Stars Gets Anime Adaptation For 2021!
The Boys’ Nathan Mitchell on if Black Noir Will Ever Turn on Homelander
Iron Man’s Personal Diary Reveals When He Became Aware of Infinity Stones
The Suicide Squad Director James Gunn on the Difficulty of Killing Off Characters