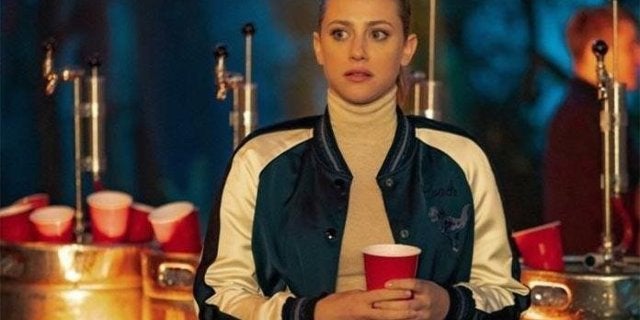 Last week on Riverdale, the popular The CW series finally caught up to the ominous flash forward that ended its third season by revealing that Betty Cooper (Lili Reinhart) appears to have murdered Jughead Jones (Cole Sprouse). Now, in the official synopsis for “Chapter Seventy-Two: To Die For”, it sounds like Betty, Archie (KJ Apa) and Veronica (Camila Mendes) are getting themselves in deep trying to hide the truth as the investigation starts to hit home.

The episode, which is set to air on March 4, will see Betty’s mother Alice working on a documentary about Riverdale, but most specifically about the twisted town’s latest mystery. While that is going on, the investigation into Jughead’s death is starting up and it’s something that will see Betty and her friends end up in a “web of lies” which certainly doesn’t sound good considering that flash forwards earlier this season showed that some version of the “truth” comes out at some point leading to Betty, Archie, and Veronica being arrested. You can check out the official synopsis for “Chapter Seventy-Two: To Die For” below.

It’s worth noting that the episode information does not include Sprouse as making an appearance, hinting perhaps that things really are quite dire for Jughead.

The overall mystery of Jughead’s fate is one that Riverdale has been building toward all season. Season 4 has thus far seen Jughead get the incredible opportunity to attend the posh Stonewall Prep school, though it was an opportunity that quickly turned into something of a nightmare. Almost immediately, Jughead found himself dealing with the shady and dangerous characters that are his elite classmates as well as the suspicious suicide of his teacher, Mr. Chipping (Sam Witwer) and well, a lot more. As things got more and more complicated for Jughead as well as apparent that classmates Bret Weston Wallis (Sean Depner) and Donna Sweett (Sarah Desjardins) are highly suspect, the series dropped in additional flash forwards that showed Jughead’s body being found and identified, then Betty and friends arrested, and even one in which a distraught Betty tells Archie that Jughead is never coming back, something she doesn’t know how to handle.

While the set up for Jughead’s apparent death in “Chapter Seventy: The Ides of March” does allow some space for there to be a larger plan at play as Jughead confronted Brett prior to his supposed death, one thing is certain and that’s that the story is one that has brought the Core Four together in a surprising way for their senior year.

“Next season is the kids’ senior year. It’s their last year in high school, and we really want to locate their stories in the high school world,” showrunner Roberto Aguirre-Sacasa said last said. “We started talking about what the big mystery could be, and we said it would be great if we kind of kept it in the high school kind of world. The other thing that we wanted to do is, this year Archie and Veronica weren’t that involved in the Gargoyle King mystery — it was more Betty and Jughead. We loved the core four together in the finale. We wanted to do something that tied them all together for the core mystery and for a big secret, and it felt like having them all around that bonfire, minus Jughead, would be a way to tie them all together so that when we get to the central mystery of what happened that night and what led to the events of burning their clothes, it would be all of our foursome and not the kids split off again.”

Riverdale airs Wednesdays at 8/7c on The CW. “Chapter Seventy-Two: To Die For” airs March 4.