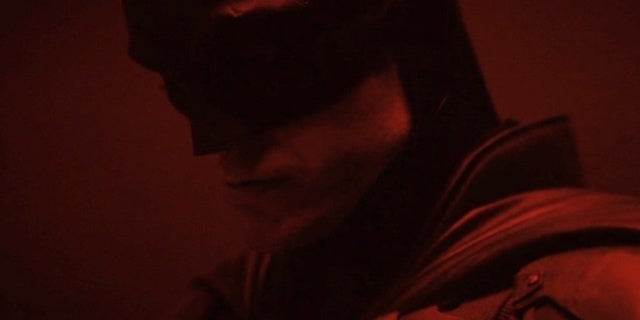 Fans finally got their first look at Batman‘s new costume with Robert Pattinson under the cape and cowl, with director Matt Reeves unveiling a camera test for the new DC Comics movie The Batman. The new costume for Pattinson shows just what direction Reeves’ is taking the Dark Knight in the upcoming film, with a seemingly do-it-yourself approach to the costume as Batman begins his career as a crimefighter in the streets of Gotham City. The footage also contained an added bonus, with a first listen for composer Michael Giacchino’s score for Warner Bros. Pictures‘ The Batman.

Check out the test footage in the video player below:

The video also includes a reveal of the new Batman logo, though it does not give a clear look at the iconic bat ears fixed on the cowl.

Reeves led Warner Bros. in an extensive search to find the next star to play the iconic superhero, who is following in the footsteps of heralded performers including Christian Bale, Michael Keaton, Ben Affleck, and many more. Pattinson enters legendary status with his first major film franchise since The Twilight Saga, and the expectations are riding high for his turn as Bruce Wayne.

Pattinson previously explained to Variety that he’d been thinking about the role for quite some time before Reeves finally selected him.

“I’d had Batman in my mind for a while,” Pattinson said. “It’s such an absurd thing to say. I sort of had an idea to do it, and I’d been prodding Matt. He didn’t accept any prods. I kept asking to meet him.”

Reeves himself has gone on record saying that his film will lean into Batman’s title as the World’s Greatest Detective, lending itself as a mystery or a noir tale unlike previous movies in the franchise.

“It’s very much a point of view-driven, noir Batman tale. It’s told very squarely on his shoulders, and I hope it’s going to be a story that will be thrilling but also emotional,” Reeves told THR. “It’s more Batman in his detective mode than we’ve seen in the films. The comics have a history of that. He’s supposed to be the world’s greatest detective, and that’s not necessarily been a part of what the movies have been. I’d love this to be one where when we go on that journey of tracking down the criminals and trying to solve a crime, it’s going to allow his character to have an arc so that he can go through a transformation.”

Fans are already freaking out over the costume reveal, and the anticipation for the DC Comics superhero movie just got a huge boost thanks to Reeves’ video.

What do you think of Pattinson’s look as the Caped Crusader? Be sure to let us know in the comments!