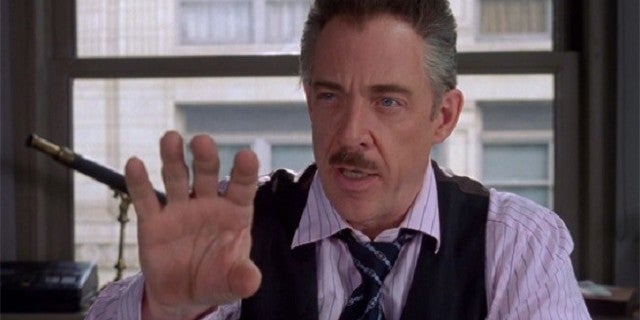 People on Twitter are still shaking from the news of Sam Raimi being in discussions to direct Doctor Strange in the Multiverse of Madness. Fans were quick to pounce on the news and one consistent thing that popped up online was from Raimi’s Spider-Man trilogy. There is a part in Spider-Man 2 where J. Jonah Jameson actually has a conversation about what to call Spider-Man. The worker takes a stab at it and says Doctor Strange before Jameson replies, “That’s good, but it’s already taken.” People are flying around with memes about that exchange all over Twitter right now and it is a sight to see. Nothing about a possible deal to direct Multiverse of Madness has been made official yet. But, this has already been a great week for Marvel. Those Super Bowl Disney+ teasers for The Falcon and the Winter Soldier, WandaVision, and Loki spread all over the web after they were revealed.

Scott Derrickson must be looking on in all of this with a lot of confusion. He left the project not that long ago because of creative differences with the studio. With filming quickly approaching, that looked like a pretty big loss, but Raimi would provide a steadying force for the film. Everything about the film and this year’s Disney+ series looks like they’re going to inform a lot of what comes next for the Marvel Cinematic Universe. All that said, there’s a ton of work still to be done on all of those shows.

Ramie might be known for those Spider-Man film and Evil Dead, but he’s had other projects crop up recently as well. Drag Me to Hell hit theaters in 2009 and the director followed that up with Oz the Great and Powerful for Disney in 2013. Producing different horror franchise reboots has been his latest role. But, fans are hoping that Doctor Strange’s sequel might be a little on the scary side. Kevin Feige isn’t exactly feeling that and he told the New York Film Academy. ” I wouldn’t necessarily say that’s a horror film, but … it’ll be a big MCU film with scary sequences in it,” Feige said of Multiverse of Madness.

“I mean, there are horrifying sequences in Raiders [of the Lost Ark] that I as a little kid would [cover my eyes] when their faces melted. Or Temple of Doom, of course, or Gremlins, or Poltergeist,” Feige argued. “These are the movies that invented the PG-13 rating, by the way. They were PG and then they were like, ‘We need another [rating].’ But that’s fun. It’s fun to be scared in that way, and not a horrific, torturous way, but a way that is legitimately scary — because Scott Derrickson is quite good at that — but scary in the service of an exhilarating emotion.”

Do you think when Sam Raimi threw the Doctor Strange reference into Spider-Man 2 that he ever believed he’d also direct Doctor Strange 2 pic.twitter.com/dZ08fsh6tv

In honor of Raimi’s talks about directing Doctor Strange 2, I will quote something from Spider-Man 2 I never thought I’d quote:

The Office Star Says Toby Flenderson Didn’t “Have the Cojones” to Be the Scranton Strangler
Injustice Side Story: Constantine – Complete Story | Comicstorian
DanMachi Unveils Season 3 Teaser Trailer and Visual!
ARCHIE Going Ahead with Some APRIL Titles Digitally & in Print, Others Postponed
LEGION OF SUPER-HEROES #6 and #7 Postponed