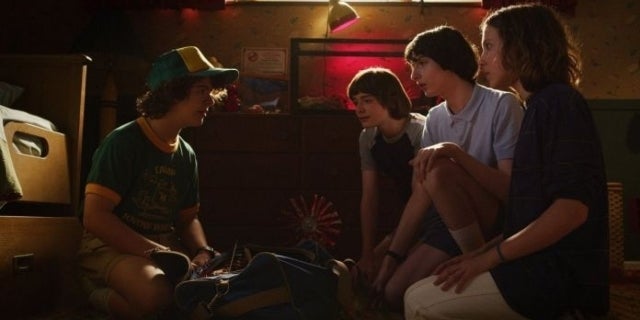 Production on the new season of Stranger Things is scheduled to begin in a few weeks, and fans are salivating for any and all information about the fourth season that they can get. That in mind, the official Writers’ Room account for Stranger Things tweeted a pretty innocuous photo from the show earlier today, a screenshot from an early episode of season three of the series featuring Lucas, Will, Mike, and Eleven. This photo has caused quite an uproar in the very online fandom who are taking it to mean something deeper.

Tweets of that nature are quite common for the Stranger Things Writers’ Room accont, who often tweet screenshots or just character names from the series to widespread panic from some corners of the series’ fans. They even recently changed their location on Twitter, previously a collection of emojis, to nothing at all, opening up a whole other can of worms based on “what it all means.” We’ve collected some of the best and most outlandish to what seems like a harmless tweet below; but tell us in the comments what you think the tweet means because it was followed up with a tweet that simply read “oh hey what’s up?”

WHAT DOES THIS MEAN

mike has two hands one for will and one for el

what is the meaning other then how adorable they all are

ignore if they all die

why are the replies under every tweet annoying af. i hope they don’t think this is their main fanbase. https://t.co/xFt1T53GAh