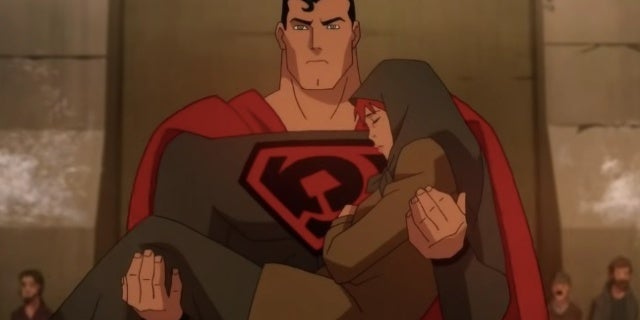 Superman: Red Son will be here before you know it and Warner Bros. just released a new clip of the animated feature. This one focuses on the news coverage of Superman being discovered and the public reaction to such a figure existing. Tensions are high in the world of Red Son and Russia is eager to show off the young man who will ensure their dominance. This storyline and the book it is inspired by aren’t exactly subtle, but the idea of various Elseworlds stories being picked up and put to screen is still very fantastic. A lot of the film still hasn’t been shown, so it will be interesting to see what the creative team decides to directly adapt and what details they will leave in the past. Fans will have to wait until February 25 to learn more.

Warner Bros. also published a synopsis of the film:

“Imagine a reality where the world’s most powerful super-being does not grow up in Smallville, Kansas—or even America, for that matter…

Superman: Red Son is a vivid tale of Cold War paranoia, that reveals how the ship carrying the infant who would later be known as Superman lands in the midst of the 1950s Soviet Union. Raised on a collective, the infant grows up and becomes a symbol to the Soviet people, and the world changes drastically from what we know – bringing Superman into conflict with Batman, Lex Luthor and many others.”

Sam Liu (Batman/Superman: Public Enemies, Reign of the Supermen) is directing Superman: Red Son. J.M. DeMatteis (Justice League Dark) will be handling the script. The movie will be released on DVD/Blu-ray and digital download on February 25.