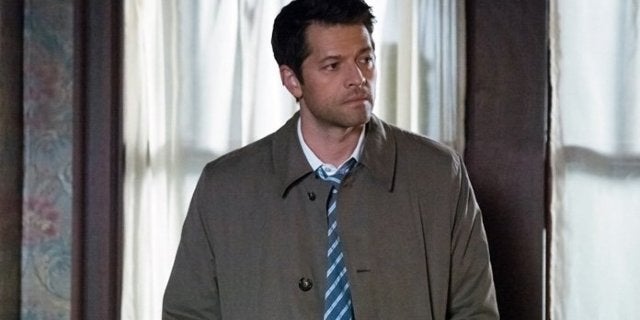 Production is ongoing for the fifteenth and final season of The CW’s Supernatural, and things are starting to wind down. As they enter the home stretch, star Misha Collins is doing a surprising thing: offering fans spoilery photos from the set of the final season. The actor took to Instagram to reveal a special phone number where fans can sign up to receive these photos, which he seemingly will never post on social media, by texting him the letters “NSFW.” It’s unclear just what kind of photos fans will be getting by signing up, but it doesn’t seem like the photos themselves will be not safe for work; so don’t worry about waking up to a dirty photo from Castiel.

“We’re getting close to the end of shooting #Supernatural,” Collins wrote. “So I’ve been taking pictures of things I’ll miss & some ‘last’ experiences. But some of them might be spoilers, so I can’t post them here. Text me “NSFW” if you want to see them: (323) 405-9939.”

Collins has been using this number for months to stay in touch with fans, debuting it back in October of 2019. Though most of the messages being sent are crafted to be sent to the complete list of fans and are automated, Collins has also been known to reply to some fans personally, so get to texting!

Supernatural fans will have to wait a little while before the final season returns as The CW has the series on an another hiatus. the long-running series returning on March 16 on a new night and time: Mondays at 8/7c.

Last month, series star Jared Padalecki took to social media to update fans on the final season by sharing images of himself returning to the show’s set while Collins also posted to social media, revealing at that time they only had 60 more days left of filming before the end. Since then the total number of days is now within the 30 – 40 range.

Last year, ahead of the final season’s premiere, Padalecki spoke about his hopes for the end of Supernatural, noting that he hoped the Winchester brothers manage to find some version of peace before it all ends.

“I feel like Sam and Dead find some version of peace,” Padalecki said. “Whether or not that’s alive or dead, or if Amara possesses me or whatever the situation is, I feel like they find more peace than when the season starts.”