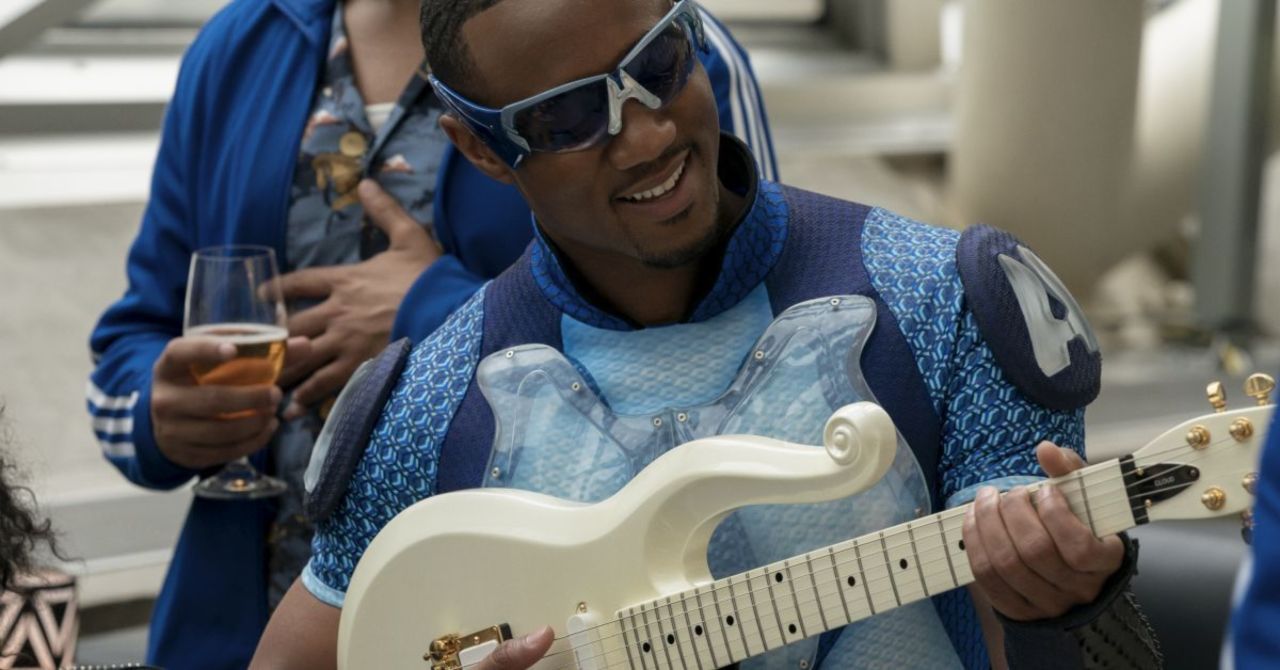 Potential spoilers ahead for the second season of The Boys! Proceed with caution if you want to go into this season completely spoiler-free. The first episodes are available now!

The first season of The Boys concluded with a literal heart dropping moment as speedster hero A-Train found himself suffering a heart attack after overdosing on compound V. As if star Jessie Usher participating in the show’s pre-release promotional interviews and official photos of the character being released weren’t enough of a clue, the second season confirms that A-Train survived and is still around. Usher returns as the character in the second episode of the new season, surprising Erin Moriarty’s Starlight in the middle of an interview. In fact, the two of them will be spending even more time together through the season as Usher revealed to us in a new interview.

“I think honestly Starlight might learn more from A-train because this is the first time that she’s got a chance to,” Usher told ComicBook.com. “She doesn’t necessarily ask questions but she has, you know she has questions. They get answered in season two. So I think she learns a little bit more about who he is and why he is the way that he is based on these series of events that play out.”

He continued, “But, they have a very interesting dynamic because neither one of them trusts each other but they know that they kind of need something from one another. They just don’t know what it is. You know, they are constantly playing this ongoing game of chess. Of like who is gonna have the advantage over the other person and when are they going to need to use that advantage. And it just allows for a lot of back and forth some teeter totter, you know, some exploitation and some, some blackmail and there’s all these things. But, at the same time they kind of need each other. It’s a, it’s a complex situation to be in.”

As becomes clear in the new episodes, A-Train is still suspicious against Starlight and is eager to get back into the good graces of The Homelander. Though he also seems to feel a small sense of allegiance to Starlight and Hughie for saving his life, so maybe he can come around. Like Usher said, it’s a complex situation.

Amazon Prime video has released the first three episodes of The Boys season two. The remaining five episodes of season two will drop weekly on Amazon afterward, culminating in the season two finale premiering on Friday, October 9 (assuming another surprise drop doesn’t happen). Though the first season dropped all at once last year, Amazon has a chance to create some appointment television for its streaming service not unlike The Mandalorian.

The series has also already been renewed for a third season but due to the ongoing coronavirus pandemic it’s unclear when it will be able to shoot, resulting in the cast for the series releasing a a dire warning for those eager to see their adventures continue: Wear a mask.

Tom Holland and Robert Pattinson’s The Devil All the Time Now Streaming on Netflix
Watchmen Wins Emmy Award for Trent Reznor and Atticus Ross’s Score
The Rock Says Red Notice Set Has “Most Aggressive COVID Measures in Hollywood”
The Boys’ Jack Quaid Thinks Bioshock Should Be Turned Into a TV Series
WandaVision: Marvel Fans Are Freaking Out About Vision’s Classic Costume