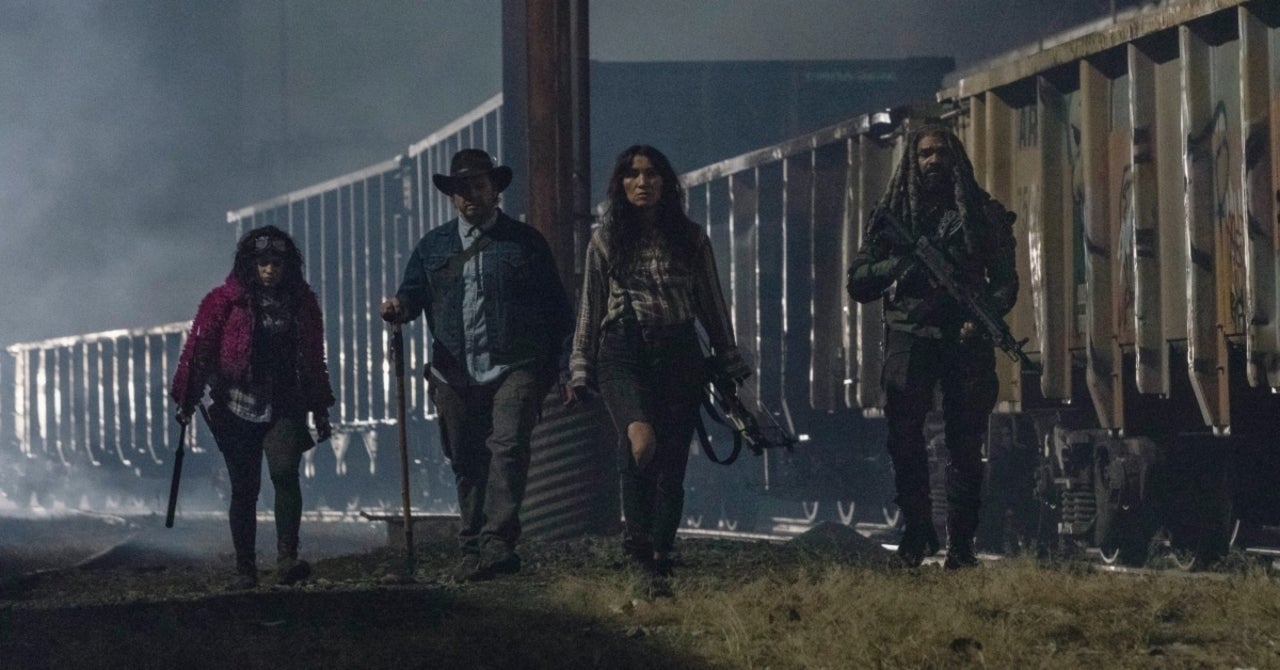 A trailer announcing the final season of The Walking Dead offers a glimpse at new characters who will reveal themselves in “A Certain Doom,” the Season 10 finale airing October 4 on AMC. Hidden in the “Epic Final Season” trailer made up of footage from the past ten seasons of The Walking Dead is a first look at the armored soldiers of the Commonwealth, a sprawling network of communities home to Eugene’s (Josh McDermitt) so-far unseen radio contact Stephanie (Margot Bingham). Traveling with King Ezekiel (Khary Payton), Yumiko (Eleanor Matsuura), and Princess (Paola Lázaro), Eugene is due to meet this group in Charleston, West Virginia, while allies back home end the Whisperer War.

The final seconds of the trailer show an armed soldier clad in the Stormtrooper-like white armor worn exclusively by officers in the Commonwealth Army, who we’ll meet during a railyard rendezvous taking place in the season finale.

In the comic books, it’s Eugene, Michonne, Siddiq, Yumiko, Magna, and newcomer Princess who have this first encounter with the Commonwealth in Ohio. There they meet Pamela Milton, who governs over a classist civilization home to nearly 50,000 survivors.

Scott Gimple, the chief content officer for the Walking Dead Universe, previously confirmed the helicopter community responsible for the abduction of Rick Grimes (Andrew Lincoln) is not related to the Commonwealth. That group with the three-circle symbol — the Civic Republic Military, or CRM — is involved with the Walking Dead movie and will first heavily feature in two-season spinoff series The Walking Dead: World Beyond.

“The Commonwealth group, we will get to I think what’s a pretty cool point for them on their journey,” executive producer and showrunner Angela Kang said when teasing the COVID-delayed season finale over the summer. “Everybody is at play. We see the return of Maggie, Negan has a key role to play. I’m excited for everybody to see our whole group doing their thing, working together to face what’s in front of them.”

In November, Kang confirmed the eleventh season of The Walking Dead — now known to be the show’s sendoff season — would have a basis in the Commonwealth story arc that ended Robert Kirkman’s comic book saga. Kang would later describe the new season as having an urban feel mixed with western and thriller elements.

The Walking Dead Season 10 finale, “A Certain Doom,” premieres Sunday, October 4 on AMC. The Walking Dead‘s extended Season 11 begins airing in 2021 and will conclude in late 2022.