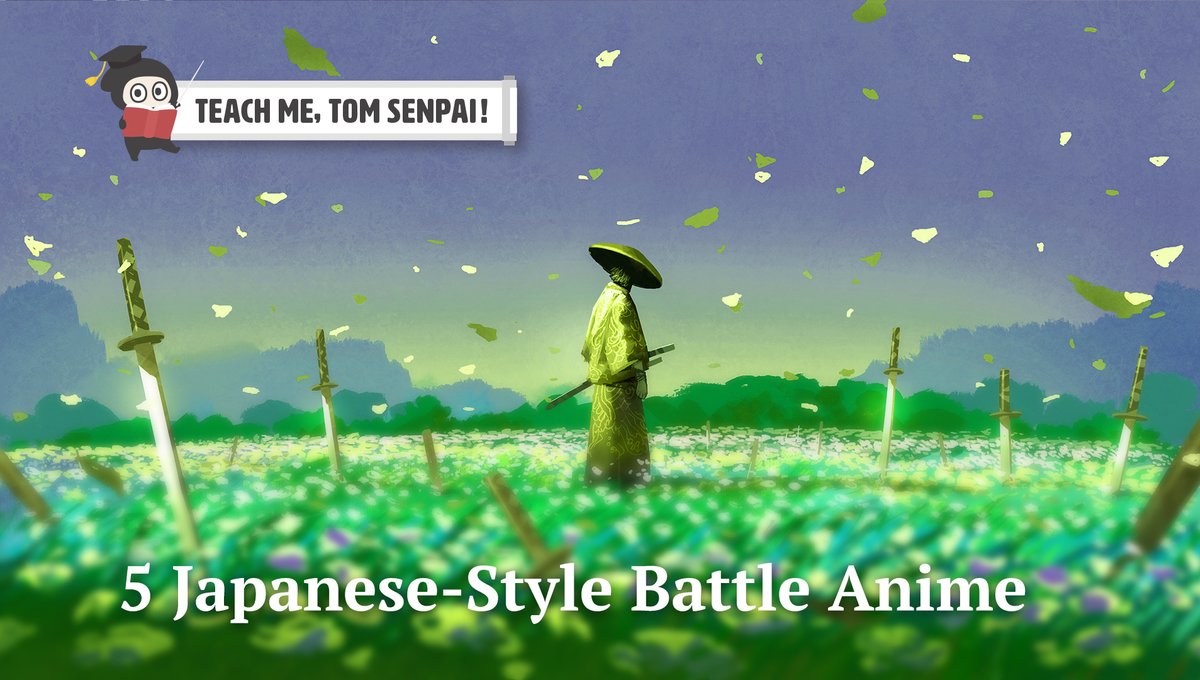 The Kimetsu no Yaiba manga ended at the height of its popularity, and the world is still groaning from the loss. The much anticipated continuation to the anime made its premiere today with the movie Kimetsu no Yaiba: Mugen Train. Yet we don’t know quite when it’ll be released outside of Japan, so there are bound to be tons of overseas fans who still can’t wait to see it.

But don’t worry! The Tokyo Otaku Mode staff has chosen five Japanese-style battle anime that are just as interesting as Kimetsu no Yaiba to tide you over while you wait for the movie to be released where you are!

This is a dark, Japanese-style fantasy that features the unique coolness of anime. This series is a new adaptation of an unfinished manga by Osamu Tezuka, the “god of manga.” It looks like they developed the new anime’s style based on Osamu Tezuka’s art, but they respected both the manga and the original anime while adding a modern interpretation, resulting in a series that challenges previous adaptations. This series will make you think deeply about how humans live with humanity.

This is highly recommended for people who like Japanese-style dark fantasies or for those who want to check out a modern adaptation of something by the lauded Osamu Tezuka!

The action scenes are really thrilling and exciting. It’s a very deep story and what stood out to me is how well the complexities of family are depicted. I was also interested in how actual history and various legends were mixed. The animation is really beautiful and the introductions of all the goblins and monsters in each episode taught me a lot. Only Osamu Tezuka could write a story with such highs and lows! It’s one of my top recommendations.

It can be grotesque but the animation is so great and the story so interesting that I couldn’t tear my eyes away from the screen.
I also feel that it depicted various kinds of families, as well as the source of humanity. I think it has a lot in common with Kimetsu no Yaiba.

Plot:
It’s the Warring States Period. The feudal lord of the land of Daigo, Kagemitsu, prays for the prosperity of his land at a certain shrine featuring 12 demon statues. The prayer forms a pact with the demons that means Kagemitsu’s eldest son is born wretched and missing various body parts, so he was dumped in the river.

Over time, the demons hold up their part of the pact with Kagemitsu, and the country is peaceful. But one day, a young thief named Dororo meets a certain man.

That man is Hyakkimaru. It is unclear whether he’s a demon or a human since all of his limbs are prosthetics, with hidden swords in his arms. His unseeing gaze is focused on demons who come to attack him…

Mononoke is often considered an “animation for adults” because of the difficult stories about humans and karma as well as the beautiful designs and artistry used to depict a unique Japanese-style world through techniques such as using washi paper textures. Its biggest charm points are the various metaphors, profound remarks, and abstract hints given throughout the stories, so you may not understand everything after one watch. If you watch it multiple times or rewatch it after a few years, you may come up with a different interpretation.

The animation is quite artistic and inspired by various types of art styles such as ukiyo-e , India-ink paintings, Noh theatre, folding screen art, and artists like Klimt and Picasso. They become metaphors for the truth behind the stories, so this series is highly recommended for art-lovers!

The homages to artwork like Kilmt’s “The Kiss” and Picasso’s “Guernica” are fun, while the washi paper textures used in the animation are unique. It’s pretty scary and made me think about how humans are creatures of karma. It’s an anthology of stories, so you can pick whichever story you’d like to watch! There are a ton of kitties in the final episode!

The colors are amazing.

A man called the Medicine Seller travels around the country with a sword that can destroy evil spirits, called mononoke. He visits places where spirits appear. Mononoke are created through karma and destiny. When spirits are clinging to human passion and grudges, they become mononoke. The Medicine Seller discovers the mononoke’s shape, truth, and reasoning before he cuts them down.

Katsugeki/Touken Ranbu is based on DMM Games’ Touken Ranbu and is produced by ufotable. Famous swords from different time periods are anthropomorphized and protect history in this story. The incredibly beautiful and intense battle scenes make this anime worth it! However, its biggest draw is all the handsome guys! Each character has its own charms, so you may have trouble deciding who’s your favorite.

The story makes you think deeply about the meaning of protecting history even as you enjoy the intense collaboration of Japanese history, battles, and handsome guys all coming together in this one amazing anime!

The battle scenes, the backgrounds, the movements of the characters…all of them are drawn in such detail that you’ll get entranced! The battle scenes are especially well animated, so I was always excited during them!

The year is 1863. It’s the Bakumatsu era: the era that marked the end of swords, a time in which the country was split between supporters and enemies of the shogunate system.

Horikawa Kunihiro, who just manifested as a Touken Danshi, speeds down a rainy mountain road with Izuminokami Kanesada, who once fought with him under the same owner. Touken Danshi are artifact spirits, spirits of swords who are roused and manifested by a Saniwa (sage).

Their mission is to defeat the Retrograde Army who have come from the future with a plot to change history and protect true history. Along with their new companions, Mutsu no Kami Yoshiyuki, Yagen Toshiro, Tonbokiri, and Tsurumaru Kuninaga, they throw themselves into the battle against the Retrograde Army in this violent era.

Is it light or shadows that reflect in their dancing swords? Touken Danshi, it’s time for battle.

Hakuoki was originally a romance adventure game that was adapted into this anime about the end of the Edo Period (the Bakumatsu era) featuring the Shinsengumi, a group of warriors that maintained public order in Kyoto. The story is based on real history and layered with fantasy elements, and it’s said that many Japanese people grew interested in the history of the Bakumatsu era due to Hakuoki. Maybe you might find yourself interested, too.

One of Hakuoki’s biggest charms is how the attractive Shinsengumi are all voiced by top voice actors. You may have trouble picking your favorite! There are so many good things about this series, like the impressive sword-fighting animation and the opening and ending themes that match the series’ setting, so that it’s hard to stop watching.

・Hot guys, hot guys, hot guys!
・It’s about hot guys, but the battle scenes are well animated.
・There’s a prequel so the story is solid. It’s all about men’s friendships!
・The ending is bittersweet, so I recommend it to people who like that sort of thing.

It’s high-quality, so I recommend it not just to women, but to men, too. Hot guys are the best!

It’s the end of December 1863. Chizuru Yukimura has come to the capital from Edo, looking for her father after they lost contact, but she’s attacked by a monster looking for blood. She was saved by the Shinsengumi, known as a murderous group, but she ends up on house arrest in their quarters because she unexpectedly uncovered part of their secret.

Mysterious people keep appearing and the secrets of the Shinsengumi only deepen. As she looks for her missing father, Chizuru learns all of their secrets as well as the truth of her birth as she becomes entwined with the Shinsengumi. They had fought for their beliefs during the Bakumatsu era. However, in the shadows, another war is brewing.

Donten ni Warau is the anime adaptation of a popular manga. It has also been adapted into a stage play and live-action movie. It’s set in Otsu, Shiga Prefecture, during the Meiji Period. It’s a fantasy story starring Tenka Kumou, the 14th-generation head of the Kumou Shrine that sits on the banks of Lake Biwa, and his brothers, Soramaru and Chuutarou.

The opening starts with the three brothers getting caught up in an incident. When the truth comes to light, the rapid development will suck you into the intense story! One of the main points to note is that the characters all have sexy voices, so this is definitely one to check out if you’re interested in that.

It isn’t just hot guys, there are also hot girls! Monsters, too!
This series has everything: family ties, friendships, wars, betrayal, revenge, romance.
It’s fairly short for how rich the story is (a 12-episode anime and 3 side-story movies), so you’ll end up binging it in one go!

It’s set in the Meiji period and the core of this story is familial bonds. It mixes legitimate Japanese history with fantasy very well.
The three Kumou brothers are all very charming and have a great relationship!

It’s 1878. Japan is rapidly westernizing and many people are unhappy with the government. The jails are full of prisoners and the jailbreaks are impossible to control. That’s when the government decides to build Gokumonjo, a prison for those who commit the most serious of crimes in the middle of Lake Biwa, Shiga. It’s the biggest prison in Japan and is impossible to escape. The three Kumou brothers are in charge of transporting prisoners to the jail, but one day, a great adventure begins to unfold for them!

The Tokyo Otaku Mode staff has chosen these five Japanese-style battle anime for people who can’t wait for Kimetsu no Yaiba: Mugen Train.

Did any of these interest you? All of them are amazing works, so please check them out! Of course, there are plenty of other Japanese-style battle anime. Hopefully we’ll be able to feature more in a future article… but in the meantime, keep an eye out for more news on the Kimetsu movie!

This is a Tokyo Otaku Mode original article.